Volvariella bombycina, commonly known as the silky sheath, silky rosegill, silver-silk straw mushroom, or tree mushroom, is a species of edible mushroom in the family Pluteaceae. It is an uncommon but widespread species, having been reported from Asia, Australia, the Caribbean, Europe, and North America. The fruit body (mushroom) begins developing in a thin, egg-like sac. This ruptures and the stem expands quickly, leaving the sac at the base of the stem as a volva. The cap, which can attain a diameter of up to 20 cm (8 in), is white to slightly yellowish and covered with silky hairs. On the underside of the cap are closely spaced gills, free from attachment to the stem, and initially white before turning pink as the spores mature. The mushroom grows singly or in clusters, often appearing in old knotholes and wounds in elms and maples. V. bombycina contains compounds with antibacterial properties.

The fruit bodies of Volvariella bombycina are initially egg-shaped when still enclosed in the universal veil. As they expand, the caps later becoming bell-shaped or convex, and finally nearly flattened in age, attaining a diameter of 5–20 cm (2.0–7.9 in). The dry cap surface is covered with silky threads. Its color is white to yellowish, becoming more pale approaching the margin. The flesh is thin, soft, and white, and has an odor, resembling raw potatoes. Gills are crowded close together, free from attachment to the stem, and initially white before turning pinkish as the spores mature. The stem measures 6–20 cm (2.4–7.9 in) long by 1–3 cm (0.4–1.2 in) thick, and is typically tapered upward or thickened below. It is white, with a smooth surface, and is often slightly curved. The universal veil is membranous, often areolate (cracked into irregularly shaped blocks) or scaly, and forms a long, saclike volva that wraps around the base of the stem. It is white to yellowish or dingy brown, and often divided into lobes.

Mushrooms produce a spore print with a color ranging from pinkish to salmon. Spores are elliptical, smooth, and measure 6.5–10 by 4.5–6.5 μm. The basidia (spore-bearing cells) are club-shaped, four-spored, and measure 19–43 by 6–11 μm. Pleurocystidia (cystidia that occur on the gill face) are usually spindle shaped, but have a widely variable morphology; they are abundant in the hymenium, and have dimensions of 26–122 by 8–57 μm. The cheilocystidia (on the gill edge) are similar in morphology and abundance, some may feature knobs held at the end of slender projections up to 20 μm long; dimensions are in the range of 26 and 144 μm long by 8–46 μm wide. Clamp connections are absent from the hyphae of V. bombycina.

The fruit bodies can be readily grown in laboratory culture.

The mushroom grows singly or in clusters, often appearing in old knotholes and wounds in elms and maples.

Both the culture liquid and the mycelial biomass of V. bombycina were shown to have good antioxidative activity, as measured by the ability to inhibit the free radical peroxidation of lipids in rat brain homogenate (Badalyan et al., 2003). Further study into various factors contributing to the antioxidant levels in this species have also been reported (Badalyan and Suzanna, 2003).

Polysaccharides extracted from the mycelial culture of V. bombycina and administered intraperitoneally into white mice at a dosage of 300 mg/kg inhibited the growth of Sarcoma 180 and Ehrlich solid cancers by 100% (Ohtsuka et al., 1973).

Unfortunately, it is easy to mistake the death cap mushroom (Amanita phalloides), as well as some other Amanita species, for this edible species due to similarities in appearance. This mistake is the leading cause of lethal mushroom poisoning in the United States. Volvariella and Amanita cannot be distinguished in the early “button stage”, that, for many, is considered the best stage to collect Volvariella for consumption. Like Amanita, the paddy straw mushroom has a volva, or universal veil, so called because it is a membrane that encapsulates the entire mushroom when it is young. This structure breaks apart as the mushroom expands, leaving parts that can be found at the base of the stalk as a cup-like structure. 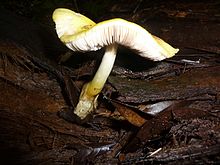 Above: The variety flaviceps has a yellow cap.

With their unusual, rounded shape and light flavor, our Paddy Straw Mushrooms are a great addition to many Chinese stir fry recipes – their soft texture provides an interesting contrast to crispy vegetables, and they soak up plenty of flavor.