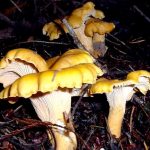 Cantharellus formosus, commonly known as the pacific golden chanterelle, is a fungus native to the Pacific Northwest region of North America. It is a member of the genus Cantharellus along with other popular edible chanterelles. It was distinguished from the similar C. cibarius of Europe in the 1990s. It is orange to yellow, meaty and funnel-shaped. On the underside of the smooth cap, it has gill-like ridges that run down onto its stipe, which tapers down seamlessly from the cap. The false gills often have a pinkish hue. It has a mild, sweet odor. It is solitary to gregarious in coniferous forests, fruiting from July to December.

The pacific golden chanterelle is the most important commercially harvested Cantharellus species in the Pacific Northwest. This chanterelle has been designated Oregon’s state mushroom, due to its economic value and abundance.

Fruiting bodies of C. formosus range from 2–14 cm (0.79–5.51 in) wide, with cap colors varying depending on light levels and weather. In dry weather, the cap is medium orange yellow to light yellow brown, but wet weather may brighten the cap to brilliant to soft orange yellow. In low light conditions, caps may not develop the yellow pigmentation, resulting in salmon to rosy buff colors. The false gills may be yellow, salmon, buff, or even whitish depending on conditions, but are usually paler than the cap. The stem is colored similarly to the cap, and is either equal-width or tapering downwards. The spore print is a yellowish white color. C. formosus has been reported from British Columbia to California, and is particularly abundant in the conifer forests of Washington and Oregon. It forms a mycorrhizal association with Douglas-fir and western hemlock, and has been shown to be more common in younger (40- to 60-year-old) forests than in old-growth forests.

Several other species of chanterelle may be found in western North America:

Since the mushrooms hold a lot of water, they are often prepared using a “dry sauté” method: after cleaning, the mushrooms are sliced and put in a covered pan over high heat with no oil or butter. The mushrooms then release much of their water, which can be allowed to boil off or be poured off and used as a stock. Many people often cook the mushrooms with butter because it “sweetens” them. Chanterelles can also be pickled in brine. Salted water is brought to a boil and pickling spices such as peppercorns, mustard seeds, and thyme are added. The mushrooms are then cooked in this solution for 5–10 minutes before being transferred to sterilized bottles along with some of the liquid. Sliced garlic and dill can be added to the bottles for extra flavor. The remaining liquid forms an excellent stock for making soup. When pickled in this way, chanterelles can last from six to twelve months. Another storage technique is drying. Mushrooms can be dried with gentle heat in an oven at temperatures of 65 °C (149 °F) or less. A vacuum process is also practical on large orders. A few hours before final preparation, put dry mushrooms in water which they absorb for returning to nearly original size. Mushrooms can then be used as fresh, and will last indefinitely as dry. Fresh chanterelles can generally be stored up to ten days in a refrigerator. Chanterelles are also well-suited for drying, and tend to maintain their aroma and consistency quite well. Some chefs profess that reconstituted chanterelles are actually superior in flavor to fresh ones, though they lose in texture whatever they gain in flavor by becoming more chewy after being preserved by drying. Dried chanterelles can also be crushed into flour and used in seasoning in soups or sauces. Chanterelles are also suitable for freezing, though older frozen chanterelles can often develop a slightly bitter taste after thawing.

Though records of chanterelles being eaten date back to the 16th century, they first gained widespread recognition as a culinary delicacy with the spreading influence of French cuisine in the 18th century, when they began appearing in palace kitchens. For many years, they remained notable for being served at the tables of nobility. Nowadays, the usage of chanterelles in the kitchen is common throughout Europe and North America. In 1836, the Swedish mycologist Elias Fries considered the chanterelle “as one of the most important and best edible mushrooms.”

Chanterelles as a group are generally described as being rich in flavor, with a distinctive taste and aroma difficult to characterize. Some species have a fruity odor, others a more woody, earthy fragrance, and still others can even be considered spicy. The golden chanterelle is perhaps the most sought-after and flavorful chanterelle, and many chefs consider it on the same short list of gourmet fungi as truffles and morels. It therefore tends to command a high price in both restaurants and specialty stores.

There are many ways to cook chanterelles. Most of the flavorful compounds in chanterelles are fat-soluble, making them good mushrooms to sauté in butter, oil or cream. They also contain smaller amounts of water- and alcohol-soluble flavorings, which lend the mushrooms well to recipes involving wine or other cooking alcohols. Many popular methods of cooking chanterelles include them in sautés, soufflés, cream sauces, and soups. They are not typically eaten raw, as their rich and complex flavor is best released when cooked.